From Headstocks To Woodstock – A Drummer’s Tale 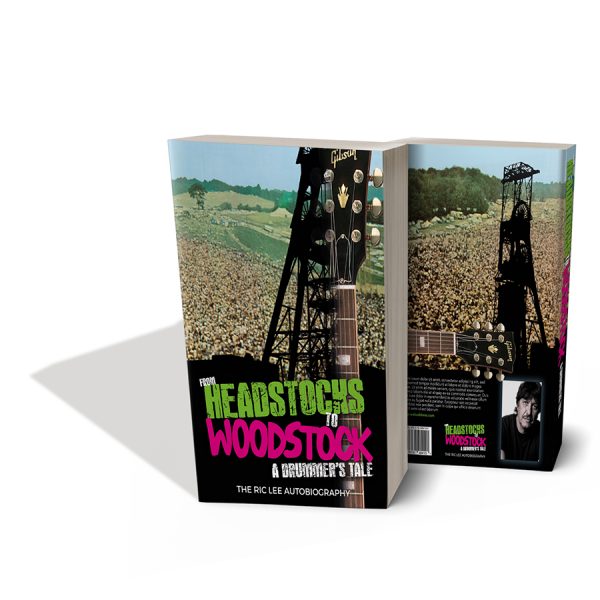 With over fifty years as a professional drummer, Ric Lee has gigged and socialised with some of the ‘all-time’ legends of the music world, so A Drummer’s Tale features Chick Churchill, Alvin Lee, Leo Lyons, Led Zeppelin, The Who, Jeff Beck, John Mayall, Miles Davis, Mohammed Ali, Black Sabbath and many, many more.

Following the Woodstock Festival in August 1969 and the subsequent movie in 1970, Ric’s band, Ten Years After became huge on the world stage. Ric’s autobiography charts the journey from the coal mining town of Mansfield in the UK to performing alongside the greats and in some of the biggest venues of the music scene: The Newport Jazz Festival with Led Zeppelin, Jethro Tull, Frank Zappa’s Mothers of Invention, Miles Davis and The Godfather of Soul, James Brown all became part of Ric’s life and enhanced the band’s burgeoning worldwide appeal. Other festivals: The Miami, Atlanta and Texas Pop Festivals, 1970’s Isle of Wight Festival (with Jimi Hendrix and The Who) and headlining London’s Albert Hall, New York’s Madison Square Garden and Tokyo’s Budokan, further exposed the band’s music to a global audience.

It’s thought that Ric performed to almost 4 million people a year between 1969 and 1975, not including the estimated 300,000 to 500,000 who saw their amazingly powerful performance at Woodstock nearly fifty years ago.

A ‘must read’ for anyone who wants to find out more about the music scene in the mid twentieth century and at a time when revolution in music was in the air.