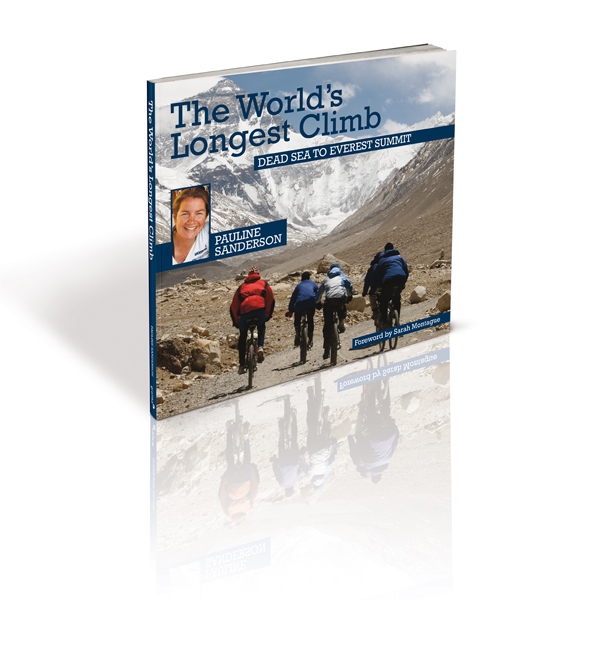 This is a humorous and touching account about an ordinary woman with an extraordinary story. Her life and experiences on the Everestmax expedition will inspire, amuse and probably astonish all those who share her journey.

For every book sold £3 will be donated to your charity.
At checkout you can also choose to make an additional donation to cover P&P costs on behalf of your charity: £4 for single books or £6 for two books.

This is a humorous and touching account about an ordinary woman with an extraordinary story. Her life and experiences on the Everestmax expedition will inspire, amuse and probably astonish all those who share her journey.

Everestmax is a tale of endurance, comedy, culture, tragedy, geography, romance and just a bit of nudity in one epic adventure. In 2006, five individuals, as diverse in age as they were in lifestyles, were the first ever to undertake the world’s longest climb. Accompanied by a support team of two, the team cycled over 8,000km from the Dead Sea in Jordan to the Base Camp of Mt Everest, journeying through Syria, Turkey, Iran, Pakistan, India, Nepal and Tibet in the process. At Base Camp, bikes were exchanged for climbing kit where the team successfully summited the great mountain itself.

The Everestmax team managed to get through a constant barrage of adversity with a surprising amount of hilarity. Extreme weather, bureaucracy, gun toting locals, sharp-toothed monkeys, political unrest, soggy crutches and illness are just a few of the obstacles they had to overcome. This unprecedented journey took the team through countries and cultures deemed ‘anti-western’ yet the reader will be inspired by the great faith demonstrated in human nature irrespective of religion or nationality.

The book also gives an honest and frank insight into Pauline’s life. The reader will understand why she was so driven to take part in such a huge undertaking at an age society often dismisses as ‘past it’ (aka middle aged).

Find out more about Pauline and the expedition at http://www.paulinesanderson.co.uk